A local court in Guwahati on Tuesday remanded Basanta Doley to 14 days police custody a day after the APSC member was arrested in connection with a selection scam.

The police team probing the scam produced Doley before the court in the afternoon and sought him in their remand for further interrogation.

Then the court allowed the police to take the APSC member in their custody for the next 14 days. Doley was arrested after 10 hours of interrogation in this connection.

Dutta caught the attention after he damaged some official documents in the office premises a couple of days after chairman Rakesh Paul was arrested by Dibrugarh police. 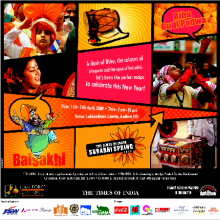 10 Apr 2008 - 11:04pm | editor
Shreemoyee Asomiya Mahila Samiti(SAMS), Mumbai in collaboration with the Department of Tourism, Government of Assam invites you all for the Times of India SURABHI SPRING FESTIVAL to be held from the...