It is with political development in BTC that four AIUDF sitting MCLA and an Aikhya Manch MCLA joined in ruling BPF party at a party meeting held in New Delhi today. BPF party has now strength 27 out of 40 members house with five MCLAs joined the party.

Jyotindra Nath Brahma, who joined BPF said that he along with three other party members joined in the ruling BPF party seeing development and welfare of the constituency.

' BPF is the only party to bring development and social uplift in the region', he said adding that there is no party can bring development and change among society except BPF party in BTC council. He has expressed his hopeful that Parbatjhora constituency will be getting ushering in days to coming through the BPF ruled BTC administration.

Abdul Ali Mondal, AIUDF MCLA, who also left his party said that AIUDF party has failed while fulfill aspiration and hopes of the common citizens in BTAD region. He said that AIUDF MCLAs leave the party to join BPF to gain development and social welfare in the region.

Mentioned be made that BPF won 20 out of 40 member house in the 2015 council election.BPF formed third council executive with support of an independent Maheswar Basumatary and after few months an independent MCLA merged up with BPF which earned strength for 22 in the legislative house. With today's development in political, BPF strength goes 27 out of the 40 member's house. Presently, UPP 7, BJP lone and 5 independent MCLA in the BTC Legislative Assembly. 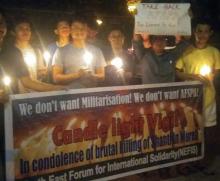 Assam-Mizoram meeting in Delhi on Tuesday

18 Mar 2018 - 11:57am | AT News
NEW DELHI: The Centre is holding a chief secretary level meeting in Delhi to mend the widening fences between Assam and Mizoram on March 20.   Union Home Secretary Rajiv Gauba will chair...