Assam State Electricity Board (ASEB), Guwahati defeated Barhoongkha AC, Kokrajhar 4-0 in the final match of the Daoharu Mungkhlong football trophy being played at Dotma HS school ground in Kokrajhar district on Sunday. For ASEB, Okrang Narzary scored first goal in 11 minutes, Swmkhwr Brahma scored another goal in 38 minutes,Rakesh Das scored two goals in 47 minutes and 60 minutes which led the team to win 4-0. Swmkhwr Brahma was adjusted ax best player of the trophy. BTC executive member Rajib Brahma handed over trophy and cash 50,000 to the championship while Biren Chandra Pukhan, Principal Secretary, BTC gave away trophy and cash 25,000 to the runners up team. 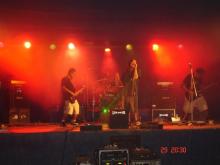 Karbi Anglong wakes up to beats of a different kind

31 Oct 2009 - 4:02am | karthikkashyap
Hit by insurgency and violence for decades, fear and despair have more or less become a way of life in Assam. It is more so in the strife-torn district of Karbi Anglong, where the rich natural beauty...

3 Jul 2012 - 2:09pm | editor
In a tragic incident that sends shockwaves in Moigaon, a country-made boat carrying eight persons capsized in the Killing river on Monday. Seven persons were rescued while one remained untraced. The...