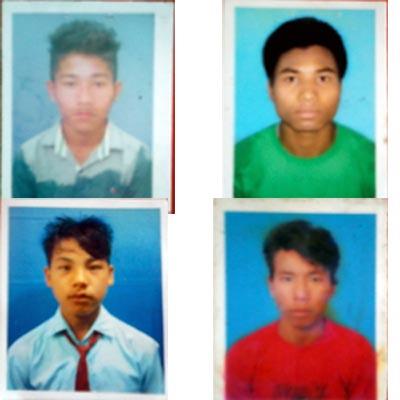 Once again four youths went missing in Delhi and Punjab going for searching of jobs from Kokrajhar district of Assam, which has been creating resented among guardian and citizens of the state.

As per report four minor children out of eight under 17 years from Karigaon area of Kokrajhar district were reportedly went missing since August second week, who were taken to Delhi by two trafficker with promises of jobs by August first week this year and kept them different places in Delhi and Punjab.

Eight youth were taken to Delhi by Deepak Mushahary of Bashbari (presently live in Guwahati) and Mithun Basumatary of Bishmuri of Kokrajhar district. The youths were handed over to Indra Khan of Delhi, who took away trafficked youths. However, four youths of the eight, managed to escape from Delhi and Punjab by first week of September because traffickers kept youths at different places. Four youths still traceless where about in Delhi and Punjab. They are identified as Tularam Basumatary(15),Rahul Narzary(16),Ransai Basumatary(15) and Bikram Narzary(16) of karigaon area of Kokrajhar district.

Sembla Basumatary(name changed),one of managed to escape from Delhi reached Kokrajhar safely told that they were taken Delhi and Punjab for jobs, but later situation was saw unsuited for living. He fled from Delhi and boarded Brahmaputra train which reached in Kokrajhar on September 5 after 30 days stay in Punjab on a miserable condition.

Parents said their children’s missing information reached by second week of August last and then intimated to police about incident.

‘We want safe return our sons’, one of missing youth’s guardian.

Dwimalu Brahma, Nedan NGO worker told that they got information about missing of youths in Delhi and Punjab. Many youths from Assam and northeastern states are missing in different states of the country going for searching of jobs,which has been creating a resented among citizens in the region.

Malaya Deka, chairperson of Kokrajhar district Child Welfare Committee (CWC) said she has received information about missing in Delhi. She said she is taking necessary measure to rescue missing youths.

25 Jul 2016 - 5:38pm | AT News
A surging water level of the Brahmaputra will submerge the city of Guwahati by the next couple of hours if the steep rising trend in the water level is any indication. The mighty river has been...

4 Jan 2016 - 1:11am | Shajid Khan
All BTC Modern song competition is being organized by Khagrabari Sports Association of Udalguri Khagrabari Janta High School playground with a four-day programme from January 6 to January 9. A total...

27 Jul 2013 - 11:39pm | AT News
Chief minister Tarun Gogoi said that a task-force would be set up within a month to look into the modernisation of the police and to control terror incidents.Addressing a press conference in Guwahati...