Hundreds of BTAD TET teachers stages with banner, placards to put pressure BTAD administration and Education department of Assam for regularization of job, releases of 15 month's' arrear salaries. Teachers warned to go vigorous movement if their demands are not in earliest manner by September 30 next. TET teachers demanded that 15 month's salaries must be released, regularized jobs, stop illegally appointment of teachers in the schools, make proper engagement so that teachers could not be face any hardship. There around 3000 teachers in BTAD region.

‘Teachers have yet to receive 15-month's salaries dud to negligence of BTAD administration and government. TET teachers be regularized and make healthy integrated in education field in the state’, agitated teachers said.

Aminur Hussain, Secretary of BTAD contractual TET Teacher's Association slammed BTAD education department for not releasing of 15 months’ salaries. He has urged government of Assam and BTAD administration to take stern action while releasing salaries as well regularization of jobs in the region. 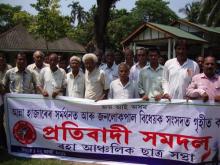 27 Aug 2011 - 8:13pm | Dibya J Borthakur
In continuing support for Anna Hazare in his fight for a strong Lokpal Bill , people from various walks of life , including students from different schools and colleges of Raha, under the...

15 Feb 2016 - 10:26pm | Hantigiri Narzary
The Songbijit faction of the National Democratic Front of Boroland(NDFB) has come down heavily on Indian Army for the notorious killing innocent boys on Sunday at North Auzarguri under Serfanguri PS...