Hundreds of bandh supporters blockade 31C National Highway at Serfanguri in Kokrajhar district along with rest of the state, on the 12-hours nationwide strike called by trade unions in protest against the governments’ indifference to their demands for better wages and facilities and the anti-worker changes in labour laws on Friday.

Road communication was disrupted since morning due to general strike call in the region.

District administration and police officials rushed the blockade spot with tried to disperse the agitators with appealed, but agitators did not give response to the appeals. They said that they blockade the NH to put pressure government for meeting their grievance and issues in the country. Government should initiate to make regularize jobs, stop price hikes,held healthy living among human society in earliest manner, agitators demanded.

“We blockade NH to put pressure govt for bringing solution of issue and grievances. Government has been deprived our demand and rights in the country”,said Chandrabati Basumatary,an agitators.

2 Mar 2014 - 8:01am | AT News
KMSS president Akhil Gogoi’s arrest runs into a hail of protest across the state.KMSS activists in large numbers have blocked roads and rails demanding immediate release of their leader who was... 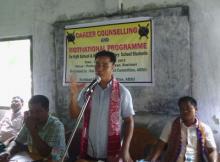