Amid a terror shadow in the run up to the Independence Day celebrations, the Asom Jatiyatabadi Yuva Chatra Parishad (AJYCP) has condemned the incident of gory attack on the common people in Tinsukia district on Friday.

In a statement issued here on Saturday, AJYCP General Secretary Palash Changmai said that only the common people have been bearing the brunt of the decade old armed conflict. He said,"armed attack on the innocent people never brings any solution to a decade old conflict. Counter insurgency operation alone is not the key to resolve the decade old problem."

Changmai squarely blamed the Government for the reign of terror in Tinsukia saying that it failed to put the security forces on alert even after the Balajan incident where 14 people were killed in militant attack at an open market.

AJYCP further urged the government and the rebel outfits to come forward for talks to help the state restore an era of permanent peace in the state.

20 Jan 2017 - 8:21pm | AT News
Senior Congress leader and a former minister in Tarun Gogoi’s cabinet will address the media tomorrow (Saturday, 21 Jan) at Guwahati Press Club. The scheduled time for the press meet is reported to... 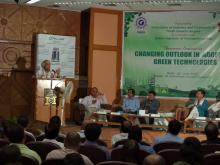 25 Jun 2015 - 10:07pm | AT News
The importance of green technologies drew no less attention when experts at a seminar in Guwahati outlined its salient features on Thursday.Organized jointly by FINER and IIE, the seminar stressed...