People in large number came out to the streets in the morning in protest against the attack on the villagers on Friday evening where a person and his son died and 6 others sustained serious injury.

“Why only we have been bearing the brunt of this conflict. Where we will go now?,” said a local villager who had a narrow escaped on Friday.

Another villager in Phlilobari who joined the protest in Tinsukia “We are quite unsecured and unsafe. Who will protest our life and property? For decades we have been living in this village and where we will go now?”

“We demand our safety and security. We want Chief Minister Sarbananda Sonowal’s stock taking visit. Let him feel our woes,” said another protestor.

Two villagers died and 6 others sustained injury when suspected ULFA(I) rebels spring upon a group of people at the village on Friday evening.

24 Apr 2014 - 11:12am | AT News
Braving a burning sun shine, 40 per cent of voters so far exercised their franchise in Guwahati in the third and final phase of Lok Sabha polls on Thursday.The voters in large numbers have been... 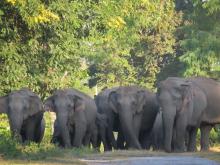