AJYCP has strongly condemned the gory attack on the common people in Kokrajhar on Friday. In a statement issued by AJYCP president Biraj Kumar Talukdar, the organization called the perpetrators a bunch of cowards and demands strong steps to bring them to book.

Talukdar has squarely blamed the BJP-led government in Dispur alleging its utter failure to ensure safety and security of the common people even in the broad day light.

AJYCP, in the statement, further demand a judicial probe into the entire incident by an acting High Court judge to unearth the real scene. “The responsible police and civil top guns should be brought to book for allowing the reign of terror to unleash,” he said.

Demanding steps to weed out the acts of senseless killings Talukdar said,” over the last couple of weeks, we have observed that the government has been trying to pacify the massive anger and agony with Rs 5 lakh ex gratia which is not the solution.“

23 Nov 2012 - 2:21am | editor
Here is good news for the food lovers of the region. The Morung, a restaurant which has been serving ethnic food of northeast, is organizing a series of food festivals in order to promote the local... 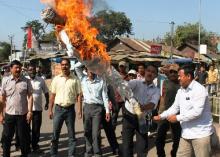 India is, no longer the Guru, only a military state

3 Aug 2008 - 5:40pm | editor
A lot of people didn't understand the hurry that Manmohan Singh was in in taking the safeguards agreement to International Atomic Energy Agency and requesting the United States President to pursue...