Demands for creation of new states 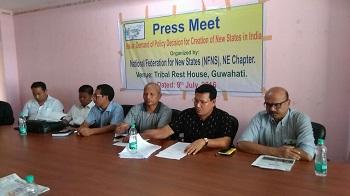 The National Federation for New States (NFNS), Northeast(NE) chapter demanded initiating of policy decision for creation of new states in India to meet good governance and healthy integration in the country.

Leaders of the North East Chapter of the NFNS while addressing Press Conference at Tribal Rest House on Saturday,apart from Pramod Boro,ABSU president and joint secretary of NFNS, Swapnajit Sanyal, working president,Vidarbha Rajya Aghadi, central executive, NFNS,Hejang Haokip,president Kuki State Demand Committee and Khorsing Teron,Joint Action Committee for Autonomous State said the demand of new states is not a new issue in India, some of it was started before independence and some after, but what is important is that most of the groups have their historical prerogatives to have a self determined administrative region in the form of a State under the Union of India. For asserting to protect and safeguard the ethnic identities of some of the ethnic communities of the North East region whose identities and existence are under constant threat due to external aggression and also to do away with the disparity in socio-economic development in some regions voices of dissent are seen to be continuously being raised in many regions of India in its 69 years of independence,the leaders said.

The leaders demanded early expedite the tripartite talk with ABSU and its allied organizations on separate Bodoland state and the NDFB (P) which remained stagnant for the last one and half years before the August 15 next failing which may compel to launch a vigorous movement. GOI should initiate dialogue with United Peoples Front & Kuki National Organization to resolve the issue of Kukiland demand, government of India should expedite talk with JACAS to resolve the demand of Karbi Automonus State in Karbi Anglong,besides resolving the unsolved State Demand issue of Borok People of Tripura.

The NE chapter of NFNS comprising the movement leadership of the Bodos, Karbis, Boroks and Kukis the today expresses deep concern on some of issues and the anti-people decisions adopted by the present dispensation in New Delhi.That the BJP was voted to power in Delhi due to their promises for bringing change in India, change meant a society of curbed market price of the essential commodities, a corrupt free society and also building a society worth for all categories of the people. Contrary to what they had promised we have seen in their two years regime that – price rise is sky rocketing, corruption is rampant everywhere and the corporate houses alone are seen to be not only favoured but also indulged to enjoy and entertain all kinds of opportunities and advantages,the leaders said.The movement groups of different regions of the country joined hands under the leadership of Shri Shrihari Aney, former Advocate General of State of Maharashtra a Leader of Separate Vidarbha Movement and Shri Raja Bundela of Bundelkhand, just before the General Election 2014 and launched a series of Programmes of different nature in national capital and different parts of the country demanding New States.

The movements for creating new states of Bodoland, Vidarbha, Karbi Anglong, Bundelkhand, Gorkhaland, Kukiland, Tripuraland etc. are some of the glaring examples of such kind. State Reorganization Commissions have been formed by the Government of India but the recommendations of those commissions could not address the grievances of the peoples as a whole and the movements therefore are seen to be still active. The movement leaders of different area formed an organization under the name and style as the National Federation for New States (NFNS) with a view to mounting a united pressure on the Government of India and also to continue the movement in a coordinated way.

21 Sep 2011 - 11:08pm | editor
Indian Chamber of Commerce is organizing the NE MSME Summit 2011 on September 23 at Guwahati in association with Bombay Stock Exchange. This summit would be a unique event having a multi level...

3 Jan 2015 - 12:17pm | Hantigiri Narzary
There are still 73 relief camps running where 1,54,305 inmates are taking shelter and 25 police fixed pickets have been set up to the displaced places in the district, said Thaneswar Malakar,...

Panchayat polls in Manipur on October 7

17 Aug 2017 - 11:17pm | AT News Imphal
The much-awaited Panchayat polls in BJP-ruled Manipur will be held on October 7 next with the model code of conduct coming into effect from Friday.  The schedule for the upcoming...