16 May 2013 - 12:02am | Ritupallab Saikia
Chaos was witnessed at Golaghat Kushal Konwar Civil Hospitla after the death of an eighteen month old male child. The deceased child Yasin Ali was admitted to the hospital at around 11.30 am on... 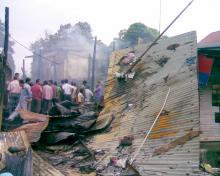 1 Jul 2011 - 9:41pm | Hamidul Gani
As many as twelve shops were gutted in a major fire that broke out at the market near NH 37 at Dudhnoi town in Goalpara District in the early hours on Friday. The fire that started accidentally in a...