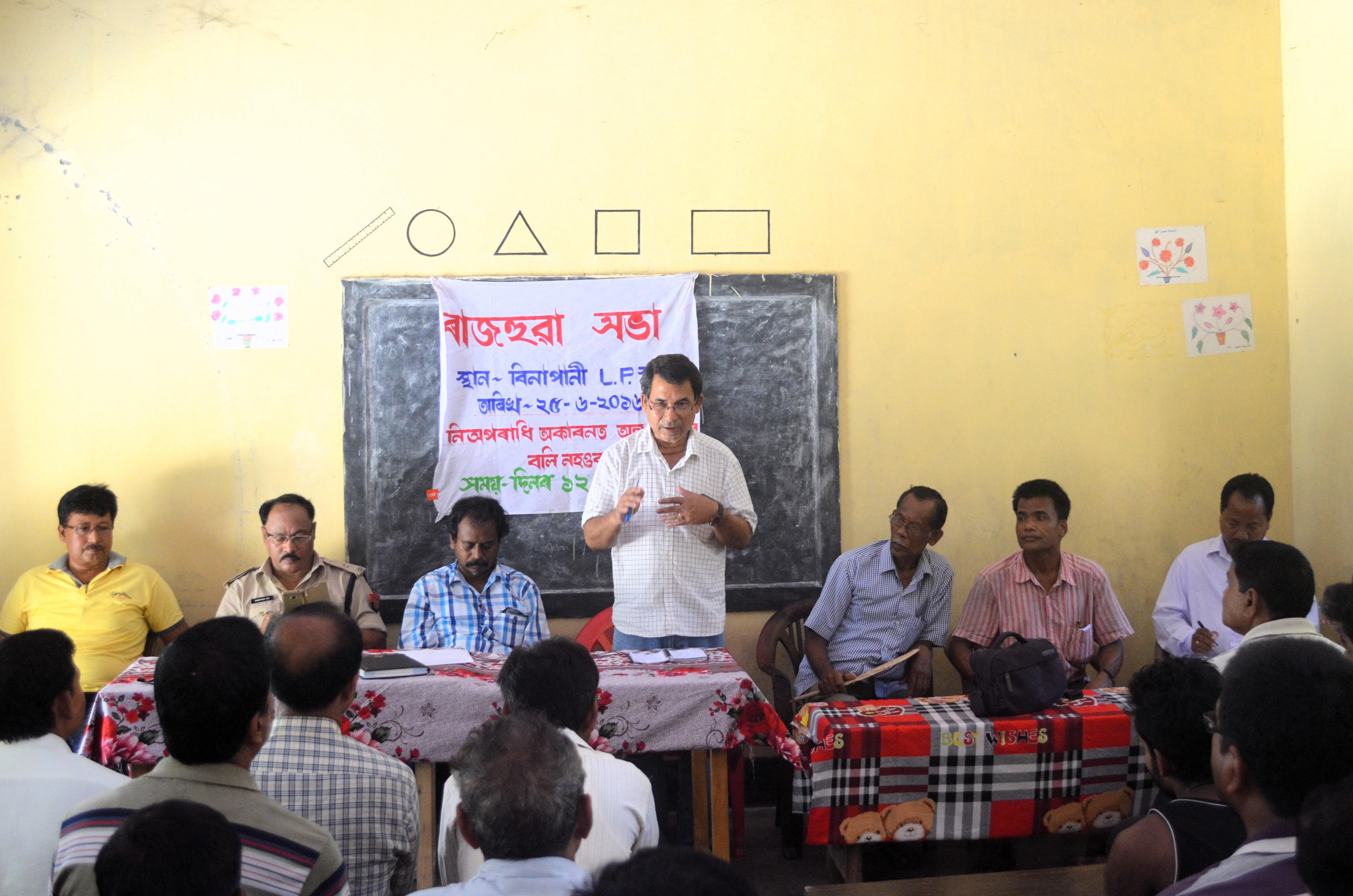 People living in and around Majorchuba village near Kalaigaon town have decided to work hard against drug abuse,illegal trafficking of girls and woman and spreading rumours like 'Child Lifting',(Xopadhara).The villagers also decided to work with the civil and police administration in the matter of checking drug abuse,illegal trafficking and child lifting.The awareness meeting was arranged at Majorchuba Binapani LP School at 1 pm by several gaonburas of the locality supported by Kalaigaon Revenue Circle Office.The meeting was presided over by DN Hazarika, SDO(S), Udalguri also in charge of Kalaigaon Revenue Circle following the incidents which had occurred on June 23 where an innocent mentally retarded lady of fifty years was mercilessly tortured by villagers specially by woman at village Gerua very near to Kalaigaon police station on the pretext of so called child lifter.Police had hard times to rescue her at the information of a media person.In his presidential speech SDO(S)DN Hazarikaspoke on the need for creating awareness among village people so that innocent people are not tortured in excuse of so called child lifting.According to him a few people used to emotionally black mail simple villagers for personal gain.He cited the instances of Harisinga and Udalguri where innocent people were harrsed brutally following false rumour of arrival of so called child lifters.He further said that unfortunately a section of educated people had been seen being carried away by emotional black mailing. JK Das, president, Udalguri District Journalist Union attending the meeting as the appointed speaker spoke on topics like drug peddling,illegal trafficking of boys and girls,witch hunting etc.On the occasion he said that most of the villageres had been cheated educated people for personal gain lurring villagers fortune and easy money.He requested villagers to take care of their children carefully so that they never fall pray to vested interested people in the matter of child lifting or drug abuse.Dimbeswar Das,Officer-in Charge,Kalaigaon police station also attended the meeting as the distinguished guest.Speaking on legal matters on drug abuse,child lifting and illegal traficking he said that sometimes people commit mistakes causing sufferings to innocent people.He said that people from other places might accidentally visit some other villages in distress and they must not be treated as child lifter.According to him people must not take law in hands and any such matter could be informed to ploice or gaonburas.Senior journalist Arun Sarma,Gaonbura Suren Kachari and Champak Saharia, teacher Champak Saharia also spoke a few words on the occasion requesting villagers not to be carried away by rumours.

9 Feb 2016 - 8:58pm | Hantigiri Narzary
While the Assam assembly election is round the corner the Chirang district administration conducted an awareness programme on the instriuction of the election commission for the political parties and...

1 Nov 2016 - 8:01pm | AT Kokrajhar Bureau
It is a shocking incident on Monday night in Kokrajhar two sons-in-law murdered their own mother-in-law that created sensation among society in the region. Police arrested the duo on Tuesday morning...

30 Aug 2015 - 10:23am | AT News
The Congress legislative body has cancelled it meeting slated for September 2. The decision was taken when a section of cabinet ministers and MLAs met chief minister Tarun Gogoi at his official...