Assam Photo Journalists Association in association with Guwahati  Press Club and Nikon India has organized a daylong free camera service camp at the press club  tomorrow (23 June) starting at 11 am. Member-journalists of the press club may bring their cameras for servicing, where they will get necessary consultations too.

10 Dec 2016 - 6:52pm | AT Kokrajhar Bureau
The Peoples Democratic Movement for Boroland (PDMB) has resolved to launch the national & international solidarity campaign for creating of separate Boroland state from January (2017) next.... 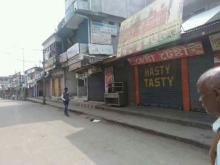