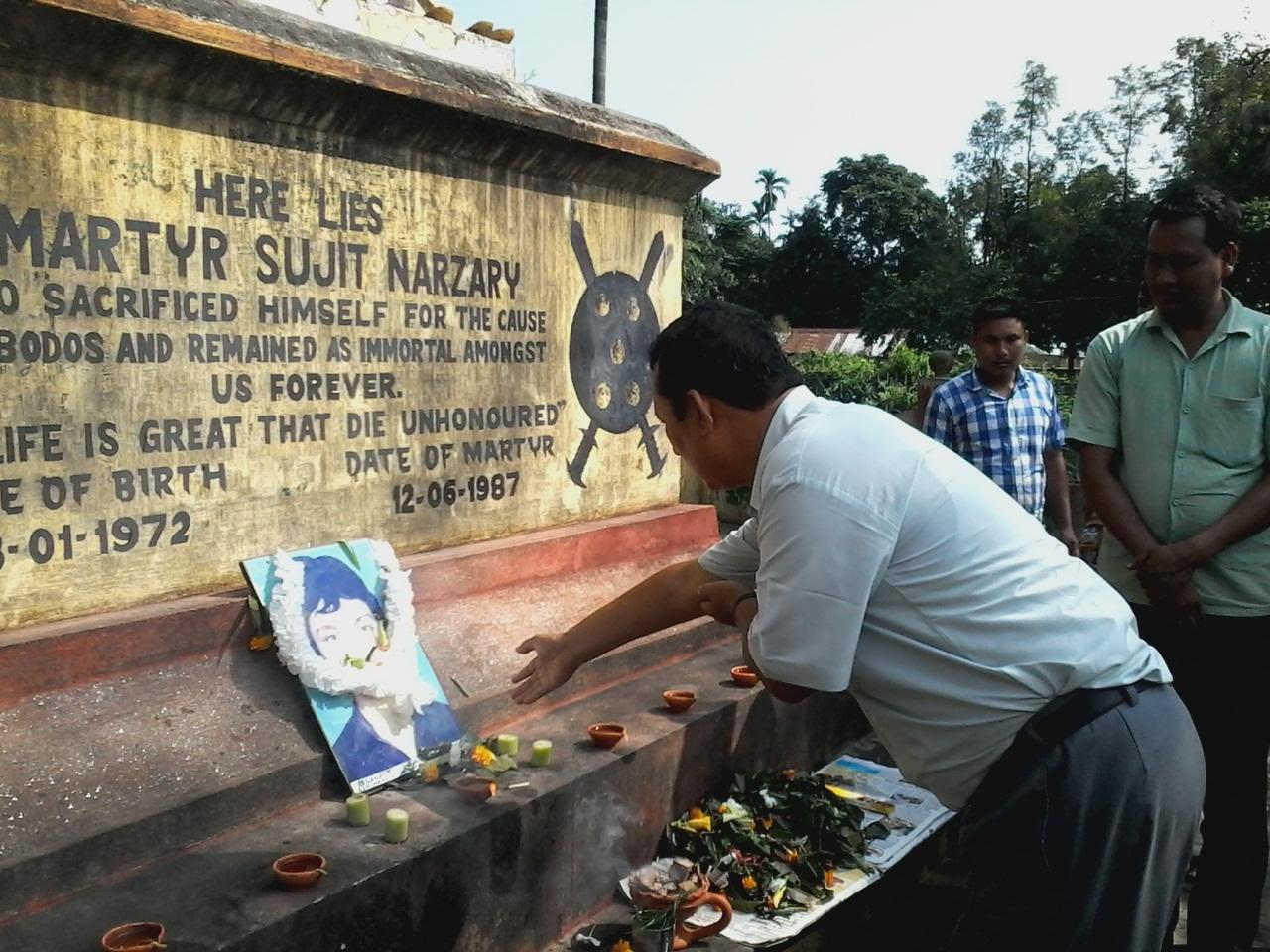 The All Bodo Students Union (ABSU) and Bodo community recalled martyr Sujit Narzary, first martyr of Bodoland movement seeking for separate Bodoland statehood, on his 29th death anniversary, was being observed at his martyr tomb at Bhatipara village in Kokrajhar on Sunday.

Martyr Sujit Narzary, was died on June 12(1987) due to attacked by anti-Bodoland while on way back to Kokrajhar after participating a grand mass gathering at Judges Field in Guwahati seeking separate Bodoland statehood. Mangalsing Narzary, father of Sujit Narzary paid floral tribute to Sujit at martyr tomb along the JD Road at Bhatipara on his martyrs day, was organized by South Kokrajhar anchalik committee, ABSU in the presence of villager and ABSU leaders.Janak Ujir,vice president Kokrajhar district unit ABSU hoisted half union flag and observed one minute silence condolence to mark the occasion. BTC executive member Doneswar Goyary attended the function and paid floral tribute to Sujit.Goyary said that Sujit Narzary, first martyr of Bodoland movement and we must remember him among society who sacrifice his life for the cause of Bodoland statehood.

Former MP Brahma recalled Sujit Narzary, who lost his life for the cause of Bodoland statehood in early age and encourage us to follow the ideology of the movement spirit. Brahma has urged state and centre to take stern step while bringing permanent solution of Bodoland issue as soon as possible besides settlement of NDFB (P) issues through political dialogue. Jayanta Kumar Roy,principal of Govt HS & MP school, paid tribute to Sujit and remembered, who Sujit was a student who strongly participated the movement whole hearted and sacrifice his life for the cause of separate Bodoland state.

‘We must remember him (Sujit) because he sacrifices his life for the cause of Bodoland issue.The ABSU has been recalling him on his death anniversary as Bodoland martyrs day to mark him among the community’,he said.

Mangalsing Narzary,father of Sujit Narzary said, “I recalled my son Sujit Narzray, who died on today’s day in 1987 due to attacked by some unidentified miscreants. I do hope that one-day dream of Bodoland statehood would be created. Bodo people and organizations should be united and unity while meeting issues of Bodoland issues in coming days to attract government’s tendency to bring permanent solution”.

28 Jan 2014 - 1:25pm | Pranab Kumar Nath
The chaos in Assamese language regarding alphabets, spelling and pronunciation is not specific to Assam. Bad education system, aggravated by the so-called globalisation, has mashed the language to...

6 Oct 2007 - 7:38am | Rituparna Goswami Pande
We are celebrating Wild life week but as we read this hundreds of animals are falling prey to the poacher’s gun, succumbing to the onslaught of floods or becoming senseless victims of man...