5 Aug 2014 - 10:21am | AT News
AGP activists are hoisting black flags in the district head quarters on Tuesday in protest against the police excess on the party protesters in Dispur. Party leaders and workers assembled in... 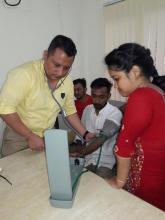