Over 1200 delegate and members from 33 district committees of the santha are participating the conference where issues related to the association will be discussed and resolution likely to be adopted.

A souvenir 'Baukhungri will also be brought out on the occasion by the Reception Committee which will be unveil by Padmashri Kameswar Brahma, president of Bodo Sahitya Sabha on the second day . 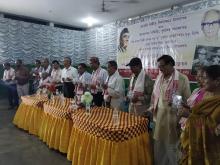 1 Dec 2019 - 11:35pm | Prantik Deka
In a tribute function, coinciding with a day-long programme, held to mark the 8th death anniversary of Bharat Ratna Dr Bhupen Hazarika as well as the birth anniversary of noted litterateur, lyricist...