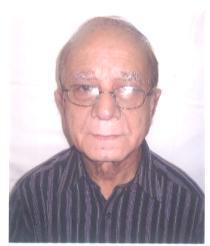 Senior journalist of northeast India and a member of Guwahati Press Club, Naba Sarma (79) passed away on 3 May 2016. Sarma, who worked both in regional and national media outlets, breathed his last at Gauhati Medical College Hospital on Tuesday morning after a massive heart attack. He left behind his wife Anima Sarma, only daughter Karishma Sarma and a granddaughter.

A resident of Guwahati, Sarma hailed from Dibrugarh of eastern Assam. He started his journalistic career from Dainik Asom of Assam Tribune group of publications and later worked with Janambhoomi group, Economic Times, Hindu Business Line with few others. He was also involved with All India Radio as a news reader theatre artiste in radio dramas.

Soon after his demise, Sarma was taken to his residence for necessary rituals. His body was also taken to All India Radio Guwahati, The Assam Tribune and Guwahati Press Club, where his former colleagues, fellow journalists and Assam students union leaders paid last tributes before his cremation in the city. Assam chief minister Tarun Gogoi also expressed his profound grief at Sarma’s sudden demise.

8 Nov 2017 - 6:19pm | AT Staff Reporter
The Udalguri district administration is gearing up for NRC draft publication on December 31. The district authority has sought cooperation and help from the people to maintain peace during the...

26 Nov 2017 - 3:51pm | AT News
GUWAHATI: A young boxing talent from Assam is waiting to steal the thunder at the Youth World Boxing Championship in Guwahati on Sunday.She is none other than Angshunita Boro who is taking on Dynnik...