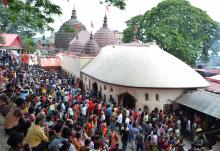 8 Feb 2016 - 7:08pm | Hantigiri Narzary
Security forces belonging to Police, Army and CRPF apprehended a link man of the NDFB-S in a joint operation at Shantipur area under Kachugaon PS in Kokrajhar district today. Getting information...