After Kakopathar, people are thronging in thousands at a peace rally in Sadiya in Tinsikia district on Thursday being organised to boost the peace process.

Organised by the Niryaton Birodhi Oikya Mancha, the peace deal is believed to have received a boost with the support of the ULFA's 28th battalion cadres who have recently announced unilateral ceasefire with the Government. The meeting on Tuesday is being attended by top cadres now in unilateral ceasefire Mrinal Hazarika, Moon Bora, Jun Bhuyan et al.

It may recalled that defying ULFA diktat people in large number attended a recent public peace rally at Kakopathar where these ULFA cadres vowed to go with the people for peace and normalcy. Notably, a few days after the ceasefire, ULFA central leadership asked them to refrain from organising public meeting. This was followed by their expulsion from the outfit charging the trio of directly working with the state in the name of peace deal.

These expelled ULFA cadres have been building public opinion to ensure a fruitful talk between ULFA and the Centre to submit these to the central leadership. They have been talking to several parties, organisations and individuals to make their peace mission a success.

12 Jul 2014 - 8:59pm | AT News
The Laxminath Bezbaruah family members are holding a two-day conference in Sivasagar from Tuesday. The event, being organized to mark the 150th birth anniversary of the doyen of Assamese literature... 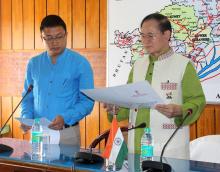 21 Oct 2015 - 11:19pm | Abhinav Verma
Legislators Nyamar Karbak and Dikto Yekar were sworn in as Parliamentary Secretaries by Chief Minister Nabam Tuki here in a simple ceremony in Itanagar on Wednesday. Both Karbak and Yekar took the...