The Chirang District Magistrate Rupak Kumar Mazumder has promulgated an order under Section 144 CrPC prohibiting setting up of booth offices or camps of political parties within 100 mtrs distance of each other, night stay of any party functionaries in booth offices except two chowkiders, bursting of crackers at any places in the district until result of election is out, wearing of uniform similar to the dress used by the forces, use of cloth to mask the faces of party functionaries or supporters at any public places, carrying of lathis, daos and other sharp weapons in public places and use of loudspeakers, assembly of 5 or more persons at any places, night stay of more than 10 persons in buildings occupied by any political parties along with Students' organizations like ABSU, AMSU, ABMSU, AASAA, Youth BPF and other youth wing organizations of political parties beween 10 pm to 6am.

Further, pillion riding on two wheelers between 10pm to 6am except women, children bellow 12 years, old and infirm persons has been prohibited during this period. This order has been imposed considering the incidents of violence, destruction of properties and furnitures in booth offices of some political parties occurred at Joypur under Amguri PS, Gobdapara under Sidli PS, Daoraigabnai and Laimuti area under Runikhata PS, Borobazar, Subhaijhar, Koptupli and Barlawgaon under Bijni PS as the district administration has  felt apprehension of further violence at different places and breach of peace in view of the prevailing law and situation in the district. This order is come into force on March 24 and shall remained in force until further order. 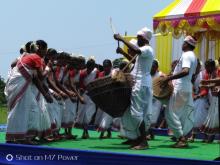 1 Jul 2019 - 10:30am | AT Kokrajhar Bureau
Kokrajhar: The 164th National Integration Day of Adivashi was celebrated today as the day "Santhali Hull Day " with day long programme scheduled at Joypur ground in Kokrajhar district on Sunday. The...