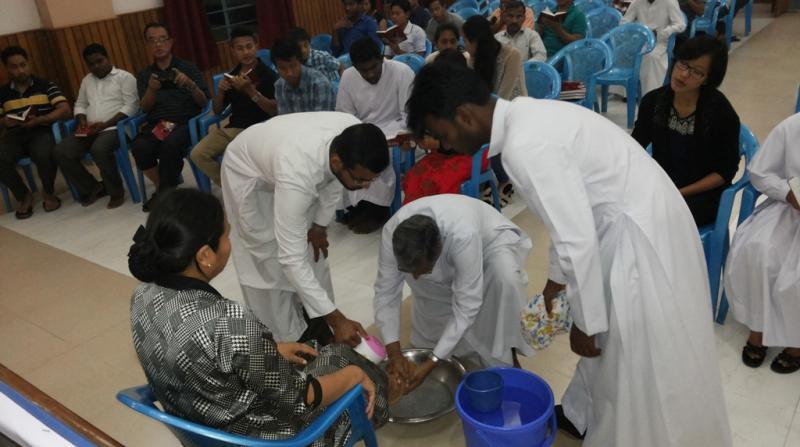 In an unprecedented ceremony recalling the historic event in the life of Jesus of Nazareth when he washed the feet of his disciples at the Last Supper prior to his crucifixion, the Vice-Chancellor of Assam Don Bosco University Dr Stephen Mavely washed the feet of 12 (six male and six female) faculty, staff and students.

Dr Mavely was heeding to the call of Pope Francis who set the example of including men and women in the feet washing ceremony on Holy Thursday, first day of the Easter Triduum, during which celebrant priest traditionally washed the feet of only men folk.

After reading of the passage from John’s Gospel (13:1-15) which narrates the incidents of the last supper, Dr Mavely wrapped a towel around his waist, knelt down before each one of 12 people and poured water on their feet, wiped off the water with a towel and kissed the feet.

“Each time I perform this action which Jesus did for his disciples, it has a deep impact on me. It makes me convinced that only from a position of service to others one can exercise authority,” Dr Mavely shared at the homily.

Following the symbolic act of Jesus, Dr Mavely invited other members of the congregation gathered for the Holy Thursday Eucharist to wash each other’s feet.

Heeding to the VC’s invitation several pairs of students, faculty and staff spontaneously came forward and washed each other’s feet in a symbolic gesture of service and humility.

“It was indeed an act of humility which I have never done before, me washing the feet of another person,” said Assistant Professor Mr P. Joseph who washed the feet of a security staff.

Several pairs of students, faculty and staff took turns to come before the assembly and wash each other’s feet. END

23 Sep 2016 - 8:50pm | AT News
The north Guwahati based Narayana Super-Specialty Hospital will support the tomorrow ‘Evening with a Doctor’ program at Guwahati Press Club (GPC) on 24 September 2016. Dr Nazmul Haque (Medicine) will...

6 Aug 2016 - 5:44pm | AT News
The government on Saturday claimed to have identified the perpetrators in the Balajan bloodbath where 14 people were killed in a reign of terror at an open market. According to government sources the...