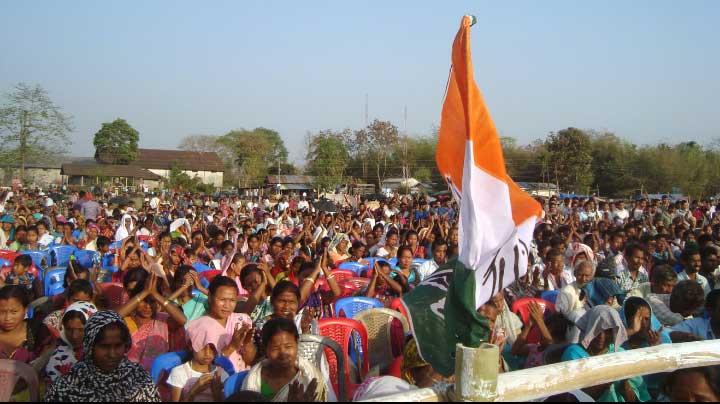 Lambasting the BPF, Tarun Gogoi stated that Udalguri district has been lying backward in comparison to other parts of state. Gogoi further stated "BTC Supremo Hagrama Mahillary has been baffled by saffron party in the name of Rs.1000 cr. "

Gogoi also said that Congress government has implemented development schemes for all class from meritorious students,new born babies to widows". He also boasted that there have been lots of development in his three tenures of government.He further blamed the electronic media of airing biased news to the audience. He also said that "BJP is the government of the affluent class and they play politics in the name of religion and they baffle common people by false promises". Gogoi appealed the masses to vote for Congress candidate Durga Das Boro. Gogoi also promised of Rs.1000 cr. Special package from state government for BTC region if they are voted to power in coming assembly election.

Addressing the mass rally Congress candidate for 64 No. Panery LAC Durga Das Boro stated BTC region has been taken to a doom and BPF has failed to provide security to the life and property of the people. It has also totally failed in all areas of development. He also said that Hagrama Mahillary's BPF has allianced with saffron party in the name of Rs.1000 cr. Lolipop. Boro further stated that the people of Panery LAC were fed up with the 15 years of misrule of the BPF. He said that he will look after all burning issues   ,for which the  common voters should extend their hands to the party.

The meeting was also attended by many district level leaders besides the members and office bearers of the local units.