An irate mob damaged a small car (AS01 BS 5445) at Tangla Tiniali on February Saturday midnight. As per eyewitness Rajib Chetri and Dipen Chetri indulged in a brawl with a group of people. After that the duo hit a  group of people with their speeding car at TB Road, Tangla and injured Basanta Boro, Subimal Saha, Kajol Saha and Pintu Saha - out of which Pintu Saha is in critical state and has been referred to Gauhati Medical College & Hospital. Both the groups were allegedly under the influence of alcohol.

Meanwhile police immediately rushed the spot and took stock of the situation ad an FIR  has been lodged at Tangla Police Station and booked Dipen Chetri and the driver Rajib Chetri under section 279, 338 and 307 IPC and forwarded them to judicial custody. 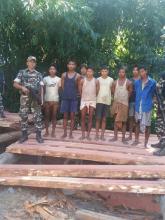 11 Mar 2014 - 2:11pm | AT News
Gauhati High Court on Tuesday deferred hearing of Akhil Gogoi’s bail plea to March 14.The court deferred the hearing on Tuesday after the KMSS president’s lawyer sought more time to represent him in...