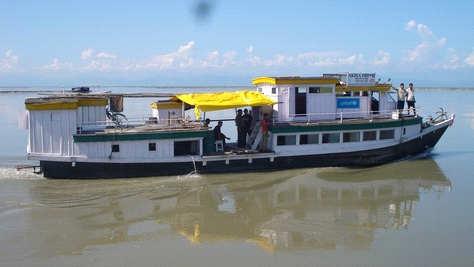 The Centre for North East Studies and Policy Research at Jamia Millia Islamia organises a two day international conference on February 22-23 "When the Mountains move and the waters rise" with a focus on disaster management especially health, trauma and housing.

It will address the need to include community concerns and priorities as well as robust research in informing and redesigning policies. This assumes priority given the devastation caused by recent earthquakes in Nepal and Manipur and the vulnerability of the entire NER as well as the Himalayan region to seismic activity.

In addition, the need for vernacular architecture (traditional housing) will also be emphasised including the Mishing style houses along the Brahmaputra, the Assam-type house as well as the importance of allying traditional styles to modern technology to make buildings, villages and cities safe during disasters.  Innovations from the Sunderbans, the North-east and other places will be presented along with official framework for improved safety and outreach.

One of the highlights will be the Centre's Annual Cultral Evening showcasing Northeastern musical talent: this time it is the turn of rap singer BK Hrangkhawl, performing to the theme of 'Roads to Peace: take me home'.. Other groups will also be performing at the Safdar Hashmi Ampitheatre on February 23rd evening.

26 Mar 2013 - 2:03pm | Indrajit Das
A story telling competition among the Assamese kids of Delhi was held on March 25 at Srimanta Sankaradeva Bhawan, New Delhi based on stories by Roxoraaj Lakshminath Bezbaroa & Bhabendra Nath...

14 Mar 2022 - 5:35pm | Dr Buljit Buragohain
As part of an international webinar series on different facets of Sankaradeva Studies, organized by the Society for Srimanta Sankaradeva in association with Naamghar Association of America, USA (NAAM...