The main Opposition Asom Gana Parishad is finalising a pre poll pact with the Bharatiya Janata Party for the upcoming Lok Sabha polls. The deal was finalised on Friday when AGP top guns now camping in New Delhi called on BJP leader Sushma Swaraj and discussed the groundwork in detail.

Talking to Assam Times, senior AGP leaders said both the parties have started finalising the seat sharing formula for the same. The process for finalising seat sharing deal has yet to complete, they said adding that a few seats have yet to be finalised. According to information, Dibrugarh, Lakhimpur, Tezpur, Barpeta will go to AGP while BJP will be fielding its candidates in Nagaon, Mangaldoi, Silchar, Karimganj. AGP is seeking Kaliabor and Guwahati while BJP is seeking Jorhat and Dhubri. Once the formula is finalised, the BJP and AGP central leadership will be meeting soon to approve it.

10 May 2015 - 5:13pm | AT News
As many as 35 girls have reached their parents in Tinsukia district a day after they were rescued just before taking to Kerala.Immediately after being rescued at the Margherita Railway Station on... 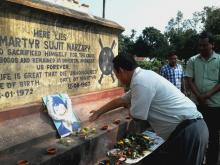