"The north-eastern region, occupies eight percent of India's land area and is home to four percent of its population. Agriculture provides livelihood to 70% of the region’s population. In Mizoram, around 51% of population lives in rural areas and is dependent on agriculture. The figure in Sikkim is as high as 89%. However, the pattern of agricultural growth has remained uneven across the region. The states continue to be net importers of food grains for their own consumption. However, over the last decade, the demand-supply gap of food grains in the north-eastern region had narrowed down. The region has low proportion of irrigated area and investment in building irrigation capacity has been insufficient and. The Farmer brothers and sisters it is clear that Assam and rest of the North Eastern states have abundant natural resources, congenial climatic conditions, large population of educated youth makes the region suitable to trigger India’s second Green Revolution. Comparative advantages of the region in producing fruits, vegetables and other horticulture products can be tapped by setting up small-scale processing units for the local market which will also boost rural employment. As stated by the Hon’ble Prime Minister of India, Shri Narendra Bhai Modi Ji, the North-East should focus on a second green revolution through organic farming.

Assam is predominantly an agricultural state and over 75% of the population is dependent on agriculture. Paddy is the most important food crop grown in the state. Cash crops like tea, jute, cotton, oilseeds, sugarcane, potato etc. contribute considerable acreage. Among the horticultural crops produced in the state, orange, banana, pineapple, areca nut, coconut, guava, mango, jackfruit, and citrus are the important ones. The state has an estimated 39.44 lakh hectares of gross cropped area, of which net sown area is about 27.01 lakh hectares.

Area under pulses and Oilseeds are 1.05 and 2.26 lakh hectare respectively, rice area covered by HYV are 63% of total rice area. Consumption of chemical fertilizers and Organic Manure are 63.2 and 73 kg per hectare. Similarly, Consumption of Chemical Pesticides and Bio- Pesticides are 39 and 6 g per hectare. But it is surprising that, our Hon’ble Prime Minister has started the Traditional Agricultural development Scheme for the promotion of organic farming and given Rs. 5.76 crore to the Assam state. That money is also not utilized by the state government, whereas, previously no money were allotted for such a scheme. In addition, for the promotion of organic farming in the North Eastern states Central Government has sanctioned Rs. 100 crore, unfortunately the state government is not able to utilize it.

The country’s population is increasing, but the agricultural land is not is not increasing. Modi Government has decided that the 14 crore farmers who is having the land should be issued a soil health card so that, they can know what disease they have in the field and accordingly how much pesticides and fertilizers can be used. For this, Assam govt. has been allotted Rs. 1.33 crore for the management of soil health card in the state, till now that money also unspent by the state government. For the irrigation of the rainfed area, the fund has been allotted and unfortunately the state government is not able to utilize it.

Few days back  I came to Guwahati and said the in the year 1994-95, Government of India has sanctioned Rs. 1300 lakh for the Dairy Development Project in the 10 districts of Assam State. In the year, 2004-05 again Rs. 910 Lakh has been issued by the Central Government, but from that also Rs. 300 lakh has been siphoned. No report of that scam was given by the state government to the centre and what happen to that money and culprit, nobody knows. The loss is obviously to the people of Assam. There is no dairy development in the state.

Country’s farmers can be benefitted only when the new agricultural technologies are utilized by them at the field level. Our Prime Minister clearly told that the country’s development is not possible until our village and farmers are not developed. The country’s development is possible only when our North East will develop, for that, our Prime Minister has decided to open New Delhi based I.A.R.I. at Assam. For the land of this institute, letter has already been given to the state government.

The headquarter (ATARI) of all the North Eastern KVKs are at Umiam, which include 25 KVKs of Assam also. The KVKs in Assam have significant achievements. The KVKs of the Assam conducted 3736 on farm trials and demonstrations under different thematic areas of crops and livestock enterprises during 2014-15 under close supervision and guidance of ICAR-ATARI, Zone-III. Apart from that, the KVKs of Assam have conducted 1020 hectare of oil seeds and 425 hectare of pulses in the year 2015-16. As many as 65174 numbers of farmers and extension personnel in the Assam state were imparted training programmes on different areas of crops, livestock enterprises, fisheries and home science. During the year 2014-15, the KVKs in Assam produced 598.69 tonnes of quality seeds, 4.04 lakh of planting materials and 2.02 lakh livestock (piglets, poultry chicks etc) and fish fingerlings. KVKs in Assam were successful in soil sample analysis and supply of 6577 Soil Health Cards (SHCs) to farmers during the current year (2015-16) and soil testing kit has been made available to 17 districts for soil testing.

In this year, ICAR allocated Rs. 26 crore for the presently functioning 25 KVKs in Assam. KVK Karbianglong under Assam Agricultural University was conferred merits of recognition for implementating government sponsored new programme  “ARYA (Attracting and Retaining Youth in Agriculture)”  with financial support of Rs 1 crore for sustainable self-employment  and income security of the unemployed youth of the district.

Some of the special programmes for KVKs of Assam such as;

By considering the geographical scenario and benefit of the farmers of this region, we have decided to open a new ATARI at Guwahati. This ATARI will serve technology dissemination and extension needs and management for the states of Assam, Arunachal Pradesh and Sikkim. This ATARI will be responsible look after the welfare and functioning of KVKs in 25 districts of Assam, 14 districts of Arunachal Pradesh and 4 districts of Sikkim, which will cover the 64% of area and 71% population of North Eastern region. Report of the Site Selection Committee for establishment of KVK in Dima Hasao district of Assam had already been submitted to ICAR and is at the final stage of its sanction. The state of Assam has contributed substantially to the food basket of the North east India and has the potential to fulfill the food grain demand of the whole region. The region has highest per capita availability of water in the country but seldom has its potential been utilized. To enhance the optimum utilization of water in the country, our government has started “Prime Minister Krishi Sinchai Yojana”. I am pretty sure that the second green revolution will have its root in the north eastern region in which Assam is surely going to play a major role."

17 Sep 2015 - 9:58pm | AT News
The Shillong police have arrested three female imposters on Thursday after he allegedly took money for providing job.On receiving a complaint from Airis Kharbuli and Fadris Kharbuli, police launched... 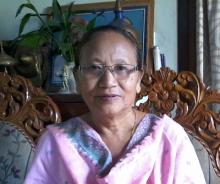