The convention which was held on Sunday on its Dhansirighat office premises in Udalguri district with Bhabani Prasad Upadhyaya, adviser of the nature organization in the chair, felt that the Government should consider setting up a forest university, where students interested in natural resources could avail higher studies in the environmental sciences and other allied subjects and carry out their research works.

Dwelling upon the theme, Dr Hari Charan Das, secretary of the Aranya Suraksha Samiti, Asom said that since the demand has been first raised by the nature organization here at Udalguri, the Government should initiate the process of the opening this university in Udalguri district. The Green Convention was also addressed by Sarat Baruah and RR Sapkota, newly-elected president and secretary respectively of the Udalguri district committee of the nature organization, Narayan Deka and Atul Nath, vice-president and publicity secretary respectively of the district committee and Somesh Mahato, central executive member of the organization.

The new district committee which took charge from Sunday from the outgoing committee also resolved to help the Joint Forest Management Committee (JFMC) which has ventured to create a ‘man made forest’ near Bhairabkunda and the villagers to tackle the rising ‘man-elephant conflict’ in the district.

30 Jan 2014 - 2:15pm | AT News
BPF candidate Biswajeet Daimary is likely to pull out of the race for the Rajya Sabha polls slated for February 7.Daimary on Thursday collected papers for withdrawal of nomination papers. Talking to... 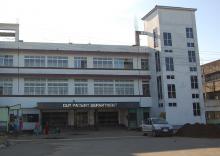