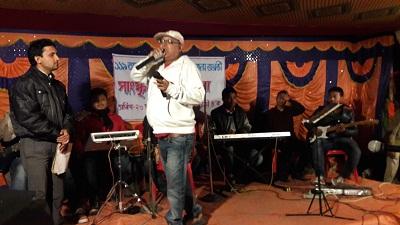 Tangla celebrated the birth anniversary  of freedom fighter Netaji Subash Chandra Bose with a day long programme on Saturday. In the morning National flag was hoisted by Malai Lahiri senior advocate Udalguri Bar Association and Ex-Chairman Tangla Town Committee. Professor Ashim Roy gave a brief speech on the ocassion. Other present on the ocassion were Mukta Deka Ex-Secretary Tangla Silpi Samaj besides few other buisiness man.Floral tributes were paid to the Statue of Netaji present at Station chowk.In the evening a cultural night programme was held were local bands,singers performed on patriotic and Bengali songs.Professor Ashim Roy was also sang on the ocassion.

25 May 2012 - 12:02am | editor
Assam and Meghalaya are all set to hold a high level meeting on Thursday to defuse the simmering tension in Langpih. The meeting is slated to be held in the chief secretary level in Guwahati to...

28 Jul 2012 - 3:27am | editor
Central paramilitary forces are fanning in the violence-hit Kokrajhar, Chirang and other adjoining areas to rein in the strings of clashes that claimed at least 60 people during the last 6 days. Of...