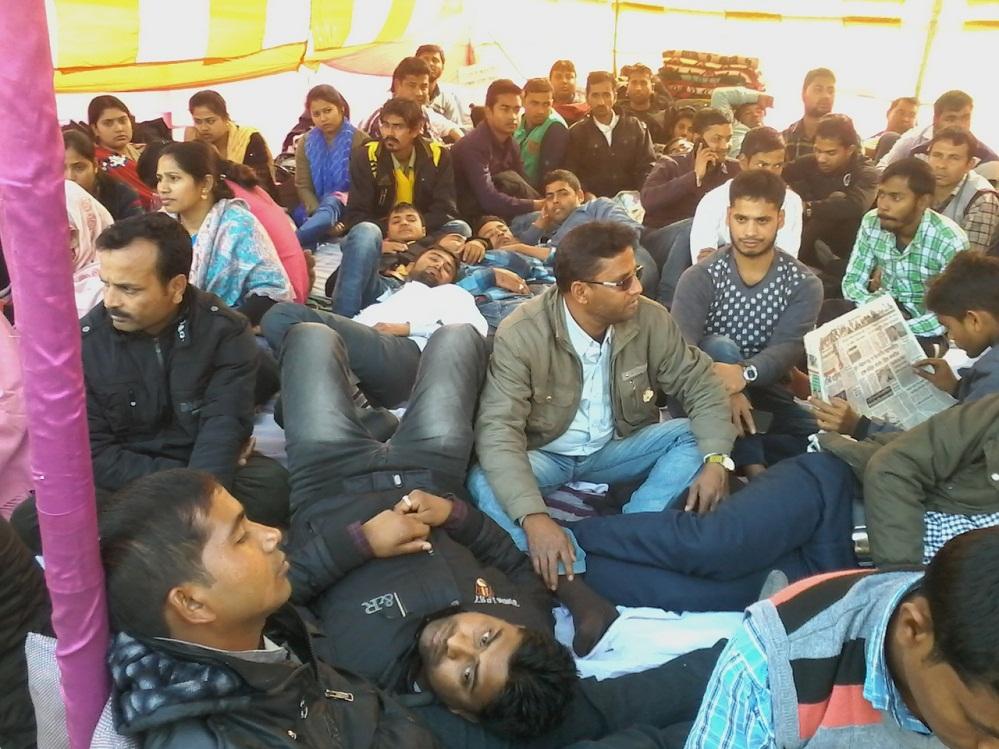 At least 20-agitator teachers’ health condition  turned to deteriorated, among them seven were reffered to hospital on its second day of 72-hours long hunger strike at Rashmela ground of Lower Assam’s Kokrajhar district, started from yesterday demanding regularization of posts, payment of balance remuneration, equal remuneration and privileges with the TET teachers appointed under SSA.

Over 200 hundred teachers from four districts Lower Assam’s Bodoland region are carrying out the 72-hours hunger strike to press the BTC administration to fulfilled their demands, under the banner of the All BTC Contractual TET (Teacher Eligibility Test) Teacher Association,which has passed 36-hours on second day strike. The teachers has been continued its strike till getting response from BTC authority into demanded issues. During the ongoing strike, atleast 20 agitated teachers’ health condition turned to deteriorated due to fasting since yesterday and doctors from Rup Nath Brahma civil hospital served  medical care and reffered seven of deteriorated agitators to hospital.The BTC authority has yet to take necessary step to the demnaded of the TET teachers who are striking for their cause.

“Several agitated teachers’ health condition  has met deteriorated due to fasting,they have blood pressure problems as they have not consumed water and any other foods since yesterday. Seven of the them were reffered to hospital for better treatment”, Doctor Vivek Pande said.

Aminur Hussain,secretary of the association said, “The TET qualified teachers of Lower Assam’s BTC area covering four districts are demanding on genuine issues, but the BTC education department is not taking any initiative of our legal demands. So, we compelled to go for the hunger strike on the occasion of Magh Bihu celebration against the injustice of BTC. The BTC education authority has appointed over 3400 TET qualified candidates into Lower Primary(LP) and Upper Primary (UP) Schools in the four BTC districts on 10 February, 2015 on contractual basis for six months (now the period of six months has extended up to 12 months), but they are  yet to get the salary for last six months were released”,he said. “Moreover, the BTC education authority has not taken any measures for the regularization of the posts said Barman. They threatened to go more and vigorous agitation if their demands are not meet in earliest manner. BTC authority has not been initiated any step to the demands of the teachers and no nay officials are visited the agitating spot”,Hussain added.

17 Sep 2017 - 10:29pm | AT News Imphal
Three militants, including one woman, belonging to the SK Thadou group of United Tribal Liberation Army (UTLA) were killed when a gun fight erupted with a group of militants suspected to be that of...

Pro plus anti: entry and exit in reshuffle

23 Oct 2014 - 2:39pm | AT News
Chief minister Tarun Gogoi pulls up his sleeves to reshuffle his cabinet. Apart from inducting four new faces, the chief minister will show the door to at least three ministers.Further, he is in the...