Flutter in BJP over Himanta’s hand in Cong-BJP clash

Much to an utter disappointment for state BJP, Dr Himanta Biswa Sarma is alleged have fuelled the clash on the GS Road among a section of Congress and BJP workers on Monday.

According to reports with evidence, the former Congress leader now in BJP asked his fellow party workers to march towards the Rajiv Bhawan where the clash took place leaving at least 30 Congress and BJP workers injured.

Dr Sarma issued a telephonic instruction to his party men after he arrived at the Gardon HS School Playground accompanying Union minister Smriti Irani, Sarbananda Sonowal, Mahendra Singh and Bijoya Chakrabarty. In his telephonic conversation from Nalbari, he asked his workers to march towards the Rajiv Bhawan.

Party insiders told Assam Times that the top leaders would examine the allegations. Then it would be conveyed to the central leadership for taking a decision.

A section of senior leaders are understood to have been unhappy with the expose where Sarma’s name mires in controversy. “Sarbananda Sonowal would look in to it. It would weaken the allegations against Nilomoni Sen Deka who struck in controversy over his remark on Smriti Irani.

11 Aug 2012 - 12:54am | Hamidul Gani
Normal life was paralyzed in Rabha Hasong areas of Goalpara and Kamrup districts following a 36 hours Rabha Hasong area bandh call which began at 6 in the morning today. The bandh was called by the... 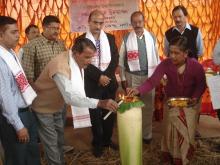