In a statement, Gogoi lambasted the Narendra Modi government at the centre alleging it an attempt to topple an elected popular government in the frontier state.

Lashing out at JP Rajkhowa, Gogoi charged the Governor with misusing the constitutional power at the instance of the NDA government at the centre.

According to Gogoi, the Prime Minister Narendra Modi talks of cooperative federalism. But his government at the centre frequently tries to interfere in the functioning of the state.

5 Feb 2014 - 4:11pm | AT News
Education minister Dr Himanta Biswa Sarma on Wednesday claimed that Congress and BPF candidates would win the Rajya Sabha poll. He said that no horse trading is required for it.Addressing a press... 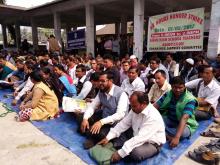 9 Sep 2011 - 4:56pm | editor
The Nor’eastern Post has been renamed the Seven Sisters Post. The daily will be launched from Guwahati and Dibrugarh in the first week of November, 2011. It will be a publication of the...