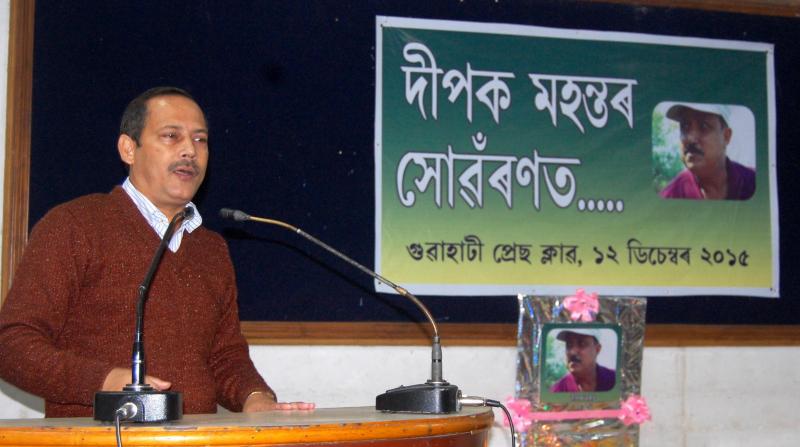 City based scribes and well wishers of Dipak Mahanta, who had recently died in a road mishap, paid homage to him in a function organized at Guwahati Press Club on Saturday. The attending journalists, while mourning Mahanta’s untimely death, emphasized on preservation of his creations for the benefit of future generation. Mahanta, who was a dedicated theatre activist and a journalist penned, designed and directed a number of plays including ‘Ulanga Roja’, ‘Malati Mem’, ‘Holi’, ‘Pinhole Camera’, ‘Gajapuria’, ‘Bhotaram Totaram’, ‘Aadipath’, ‘Dhaniramor Theatre’, ‘Kurma Avatar’, ‘Tejimola’, ‘Dhodar Alir Tender’, ‘Jadughar’ etc.

He also prepared scripts for hundreds of documentaries relating to various socio-cultural issues. Graduated from Biswanath College in 1979, Mahanta was partially involved with the profession of journalism during his productive days through different newspapers like ‘Mohajati’, ‘Agnigarh’, ‘Boodhbar’, ‘Natun Dainik, ‘Dainik Pratibimba’ and ‘Asomiya Pratidin’. He joined NewsTimeAssam as a producer and started television journalism career. Lately Mahanta was involved with AssamTalks as a senior producer.

The speakers including Manas Kumar Mahanta, Raman Bora, Sanjib Phukan, Mrinal Bora, Rupam Barua, Jagadindra Raichoudhiry, Nava Thakuria, Jesim Raja etc highlighted the simplicity of Mahanta, even though he had to fight all along for survival and creations.

Meanwhile, Mahanta’s family members have performed the rituals at his Tezpur residence with Adyashraddha today and Matsyasparsha scheduled for Monday next.

29 Mar 2010 - 6:57pm | editor
A simmering political mercury over the recent Rajya Sabha polls has forced the adjournment of the House twice in 30 minutes on Monday. it All these began when the opposition party MLAs disrupted the...