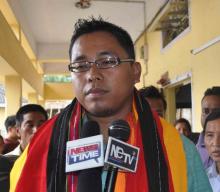 Kin of first martyr of Assam movement stands against bill

8 Dec 2019 - 10:24pm | Shajid Khan
The family members of the first martyr of the Assam Movement,Khargeswar Talukdar in run up of the December 10 which is observed as Swahid Diwas (Martyrs’ Day) in Assam to commemorate the death...