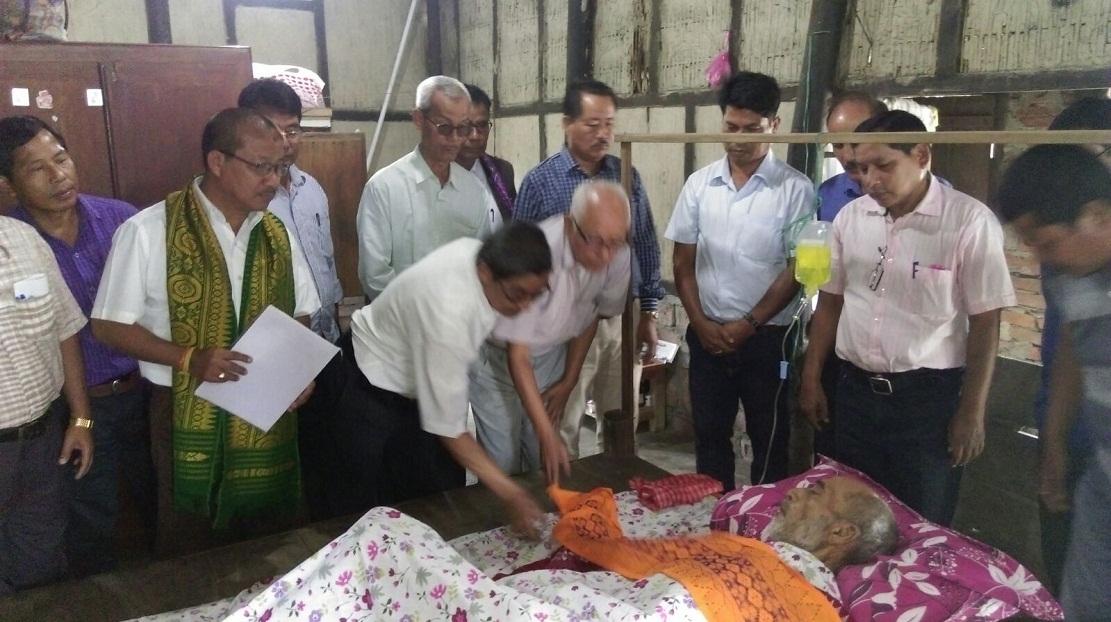 The Bodo Sahitya Sabha has offered financial support to noted literateure and former general secretary of the sabha Tarun Phukon Basumatary, who is suffering of old age ailment. He is now  75 years. A sabha delegation team visited Basumatary at his house at Dhobai village, Gossaigaon today.

Sabha president Dr Brahma and well wishers felicitated Basumatary with traditional Aronai, prayed and wished to almighty god an early recovery for him from his illness.

Basumatary was general secretary of the sabha since 1968-71 and dedicated towards development of Bodo language and literature in his life. He was also one of the member of the movement for medium introduction for Bodos in Assam and Bodo language was inducted as medium of instruction in 1968 into High School.He was associated with various social organisation and activities in his life and retired as headmaster from Joymagaon ME school in 2002.

Basumatary has been taking medical treatment at his own residence letting on bed in a financial scarcity since few years back due to ailment.

Sabha delegation handed over cheque of Rs 50,000 on behalf of Chief Minister Tarun Gogoi, who has extended financial support to ailing Basumatary at his own residence.

Dr Brahma thanked CM Gogoi for his sanctioning financial support said that though sabha wanted more supports from govt, however govt has extended 50,000 to support for his medical expensive.

He told that the sabha submitted a memorandum to BTC chief Hagrama Mohilary seeking financial support for Basumatary, yet no fund was released so far from BTC administration.

He has urged BTC administration to provide financial supports to the noted literary leader in his life . Dr Brahma also prayed to almighty gid for speedy recovery and wished a healthy growth.

Devodutta Basumatary, son of Tarun Phukon, an economic graduate from Swahid Bhagatsingh College from Delhi told that condition of his father has been deteriorated more since last few months and today his status is seeing more serious. He said that family has admitted to New Delhi based hosputal for medical purposes few days in some months back, but due to financial hardship treatment was shifted to Kokrajhar own house and since then treatment is holding in his birth place ax family is not in financial sound.

He also told that no leader from BTC administration are reached, except Bodo sahitya sabha in his family. He said his family is facing severe financial suffering due to poor family condition.

Devodutta prayed for early recovery of his father and wished a healthy suitable conditions in their family.

13 Mar 2014 - 1:02pm | AT News
Over 300 KMSS activists were courted arrest in Guwahati on Friday when they staged dharna demanding immediate arrest of Chief minister and revenue minister in connection with the recent self...

7 Jun 2015 - 2:52pm | AT News
Assam will not bear the extra burden of more Bangladeshi people after the implementation of the Indo-Bangla land deal. This was what Assam Pradesh Congress Committee president Anjan Dutta said on...

6 Jan 2016 - 8:20am | Syed Miraz Ahmed
Wildlife research, a subject which was fairly unknown even a few years ago, is now fast becoming one of great interest for the younger generations who seek alternative careers as wildlife researchers...