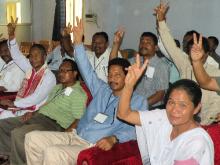 15 May 2011 - 4:14am | Jayanta Kumar Das
The results of the assembly election which was held in April.2011 has been declared on May 13 in Assam.Congress has won three seats in Darrang district while its ally BPF won three seats in...