22 Nov 2014 - 7:14pm | AT News
The Golaghat police have blamed Naga militants for the recent firing at Ratanpur paddy field where a villager was killed and three others sustained injury.According to police, despite tight vigil by... 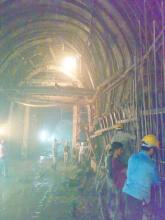 27 Jul 2011 - 5:06pm | Anup Biswas
The construction of Tunnel No 10, near Jatinga of Lumding – Silchar BG conversion project will be completed within the target period of 30th October 2013, if the geological condition of the...

2 Apr 2013 - 11:53pm | Rituparna Goswami Pande
If I had wings and were a birdWould travel the world and orbit the EarthOr had I been a butterfly Eclectic colors would be mineI would hover over trees, flutter over blooms, On a spiritual...