Opposition parties taking out procession in the city

As many as 12 Opposition parties are taking out a procession in the city to the Rajbhawan demanding the immediate dismissal of the Tarun Gogoi Government and also in protest against the hike in fuel prices linking it with UPA government’s failure. The people in the procession are set to call on Assam Governor and submit before him a memorandum alleging some tainted ministers in the Gogoi cabinet. 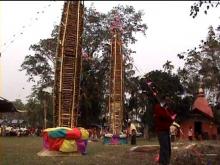 29 Nov 2017 - 4:35pm | AT News
NEW DELHI: The Supreme Court on Wednesday reserved its ruling on the validity of panchayat documents in the ongoing process to update the National Registrar of Citizens as it heard a set of 19...