Finally, the authorities have started crackdown on a section of pharmacies for failing to meet the norms in Tinsukia district of Assam.  A team of health department visited a number of pharmacies in Margherita, Ledo and Jagun areas on Saturday.

One of them in Jagun while another pharmacy was selling medicines in Lekhapani area. Local residents have appreciated the move to rein in a section of private medical establishments. 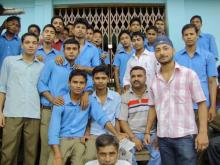 5 Aug 2011 - 5:51pm | Dibya J Borthakur
The Raha unit of the All Assam Students’ Union ( AASU ) today staged a demonstration in front of the Raha ASEB office in protest against the...

13 Apr 2018 - 9:16pm | Nikhil Mundra
HOJAI: Hojai, the headquarter of the newly created central Assam district suddenly turned into Kashmir after a huge hailstorm that lashed the town for half an hour on Friday.Hailstorm accompanied by...