One after another scam seem to have rocked ONGC where a circle of officials and contractors have picked up the first buck. The things have gone to such an extent that a section of contractors have managed award of contract even by producing fake documents. But is it possible without the support of the ONGC officials?

A recent contract triggers no less controversy in the ONGC Assam Asset office after the authority awarded it to a firm on the basis of the a set of documents which lack veracity.
Identified as M/S Construction Guild the firm managed to get the contract Rs 10 crores in the name of a huge project.

According to allegations, the oil giant  invited tenders for its Civil division works of RCV 5VC 1439 and 15007. The construction firm submitted their annual turnover of over Rs.3. 13 crore. But the same firm submitted their turnover as Rs.7.13 crore  for another contract of engineering works of RC 2 AC 15022,15023,15024 and 15025. But the firm managed to get the contracts of Rs 10 crore.
The Sivasagar District Contractor Development Council has already lodged complaint before the authority. But of no avail.

19 Mar 2014 - 3:55pm | AT News
Despite stepped up vigil rhino poachers continue to strike in Kaziranga.Poachers have in this national park killed yet another rhino on Wednesday. The incident took place at Kohora range of the world... 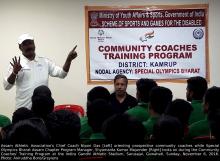