Akhil vs Mrinal over Kaziranga

BJP leader Mrinal Saikia came down heavily on Akhil Gogoi saying that the KMSS leader was addicted.
Addressing the reporters in Golaghat on Monday, Saikia called Gogoi a Congress agent.
“Akhil is a leader who is addicted to movement and protest. He cannot live a single day without engaging in movement or protest,” said Saikia.
The BJP leader filed a PIL alleging presence of Bangladeshi immigrants in Bandardubi, Deochor, Palkhowa areas of Kaziranga. 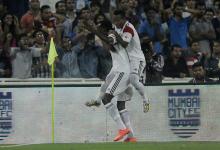 25 Oct 2014 - 9:32am | AT News
The Northeast United FC has secured the second position in the Indian Super League after they beat Mumbai FC 2-0 goals at Navi Mumbai on Friday.Kondwani Mtonga struck the first goal to take the lead...

19 May 2008 - 2:18pm | editor
One Dilip Kalita, arrested after charging with duping a landowner has been remanded to judicial custody on Sunday by the Kamrup district session court. The accused has admitted that he has been...