Two ULFA cadres have been killed during a police, Army joint operation in Bhujkuchi area under Tihu police station in Nalbari distirct early in the morning on Friday. According to information, two pistols and an Austrian grenade has been recovered from their possession. Details are awaited. 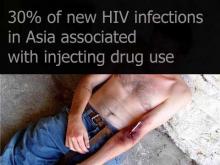 28 Jan 2008 - 3:36am | bobbyramakant
Thirty percent of all new HIV infections in Asia are associated with injecting drug use, estimates the joint United Nations Programme on HIV/AIDS (UNAIDS). Nearly half of the world's estimated 13...