The Golaghat police have arrested two persons in connection with a murder case in Numaligrh on Thursday. The incident took place on September 19 where a Muslim cleric went missing and his body was recovered at a drain in Numaligarh Tea Estate two days later.

Acting on a tip off, police on Thursday nabbed the duo identified as Swapan Suri and Drup Munda of Behora Tea Estate.
Drup confessed to have committed the crime with the help of his friend Swapan Suri. 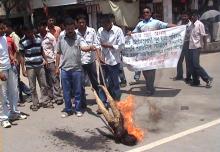 27 Jun 2016 - 5:28pm | AT News
Expressing shocks at the mysterious death of a lady scribe in Punjab, the Journalists’ Forum Assam (JFA) demands an authentic probe into the incident to find the culprits and book them under the law...