In yet another move that can land Gopinath Das in more trouble, the Boko AIUDF MLA is believed to have enclosed a doubtful affidavit before the Gauhati High Court seeking anticipatory bail in the domestic help rape case.

Sources told Assam Times that Das has enclosed an affidavit in the name of the victim’s father who revealed to have brought the rape allegations because of mounting pressure from a section of political leaders to defame the MLA just six months before the polls.

Family members of the victim, however, refused to have submitted any affidavit of the sort, much to the relief of the absconding MLA. The Gauhati High Court on Monday is set to decide on the fate of the AIUDF MLA who is wanted by police.

3 Sep 2014 - 9:03pm | Hantigiri Narzary
Jaiklong Brahma, a senior journalist in Kokrajhar, was arrested by police on Tuesday night in Kokrajhar for links with NDFB (Songbijit faction). Brahma, who is currently working as... 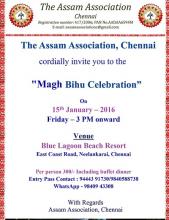