Tale of a dilapidated wooden bridge 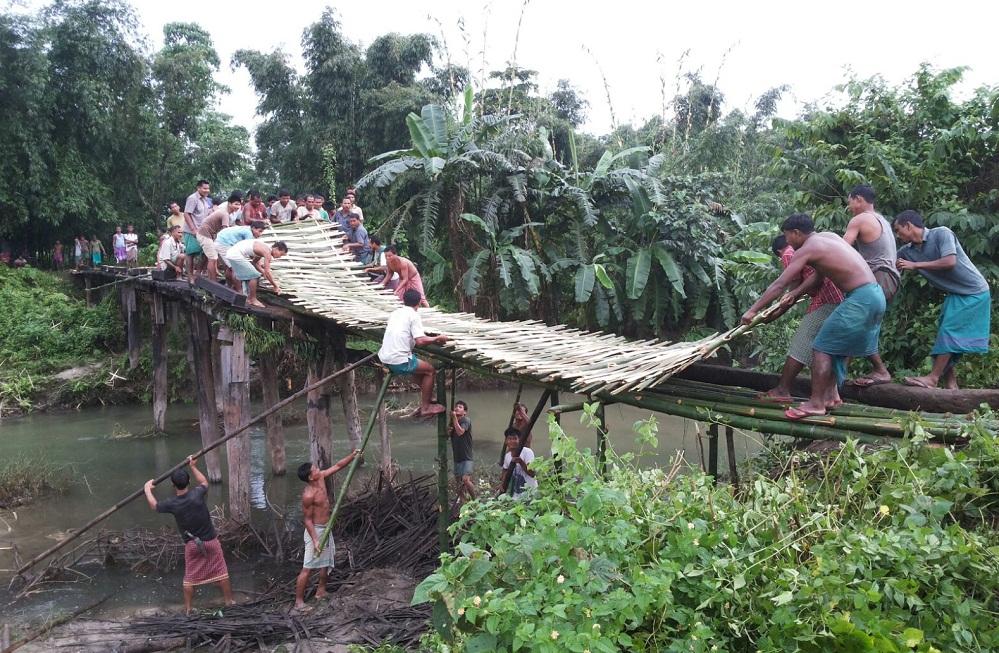 At a time when BTC chief Hagrama Mohilary boasts of turning BTAD into a model region, common people of greater Karigaon area are engaged in the constrcution of bamboo bridge to restore sirface communication.

Hundreds of local residents from 15 villages come out and joined hands in the construction of a broken wooden bridge with bamboo to facilitate people's communication in the area.

Local residents alleged that despite requests, MLA Pramila Rani Brahma, BTC chief Hagrama Mohilary and district administration have done precious little to uplft the bridge forcng them to repair it.

Udaram Basumatary, village headman of Amlaiguri said that the bridge along the Balajan River at Moslapara-Haldibari village had been lying in construction since 15 years and till today peoples are to face severe hardships while maintaining this communication. Publics from the area prayed ti the local MLA and BTC administration to construct the road and bridge, yet no any steps were initiated to the demands.

Leaders from ruling BPF party including MLA Pramila Rani Brahma, BTC chief Hagrama Mohilary visits the area for votes during election times and assures to construct, but later they all forgets all demand and issues of the common publics, he said adding that the recent floods had eroded and washed out property and roads in the area.

Binendra Basumatary, another village headman of Haldibari village also slammed the BTC administration and govt said that not a single step was spotted in the area during recent flood as citizens of the area suffered huge damages of properties. He has also alleged that no any representatives from the administration and officials took stock of the communication hardships in the area since last decades ax peoples are depriving of road communication.

He said, 'Peoples from the area come out and join hands to hand to construct bamboo bridge to facilitate peoples communication through the greater Karigaon north area which is the only bridge to connect 31 national highways at Karigaon under Kokrajhar east constituency'.

District administration official and local leaders from ruling party always deprived the local publics in all fronts of development facility and communication, besides keeping the aside in their leading life in the district, he added.

6 Aug 2012 - 2:55am | editor
After a very brief silence, violence seems to have resurfaced in the BTAD areas. In a yet to string of murder and mayhem, five persons have been killed in Kokrajhar on Sunday. Three bullet riddled...