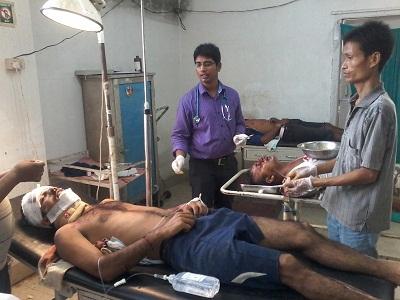 At least six SSB jawans including a driver(civil ) were received serious injuries when a jawans carrying vehicle was met mishap at Mwinaguri area near Ultapani this morning in Kokrajhar district.

The SSB jawans from 59th battalion posted at Mwinaguri Saralpara along the Indo Bhutan border extremely north of Kokrajhar district were on a vehicle was met mishap around 9 am this morning following excel broke down on running which was on way to Kokrajhar where SSB jawans received serious injuries.

The injured jawans were immediately rushed to Kokrajhar RNB hospital by SSB ambulance, three of the injured are said to be critical condition.

They were identified as Harmender Singh (25), Sailendra Sarma (24), Mahmmad Parook (34), Rajendra Kumar Tyagi (23), Niwas Kumar (25), Biki Paswan (25) and Ziadur Rahman (23), driver of the vehicle. The injured persons were rescued by SSB ambulance which was already stationed at Mwinaguri for the same.

Three of the injured jawans were referred to Guwahati for better treatment following critical condition, said a senior SSB officer in Kokrajhar.

6 Sep 2011 - 3:47am | editor
Amid a string of protest Assam Chief Minister Tarun Gogoi left for Dhaka on Monday to accompany prime minister Manmohan Singh who will be a two days visit to the neighbouring country. Gogoi, who...

25 May 2014 - 9:54am | AT News
The dissident Congress leaders skipped their visit to the governor after the AICC announced CLP meet  by May 28 to sort out the difference. Chief Minister Tarun Gogoi was believed to have told...

17 Jun 2014 - 11:51am | AT News
The Guwahati Metropolitan Development Authority has called the encroachment of Silsako Beel in Guwahati a criminal offence under Guwahati Water- bodies Preservation and Conservation Act 2008....