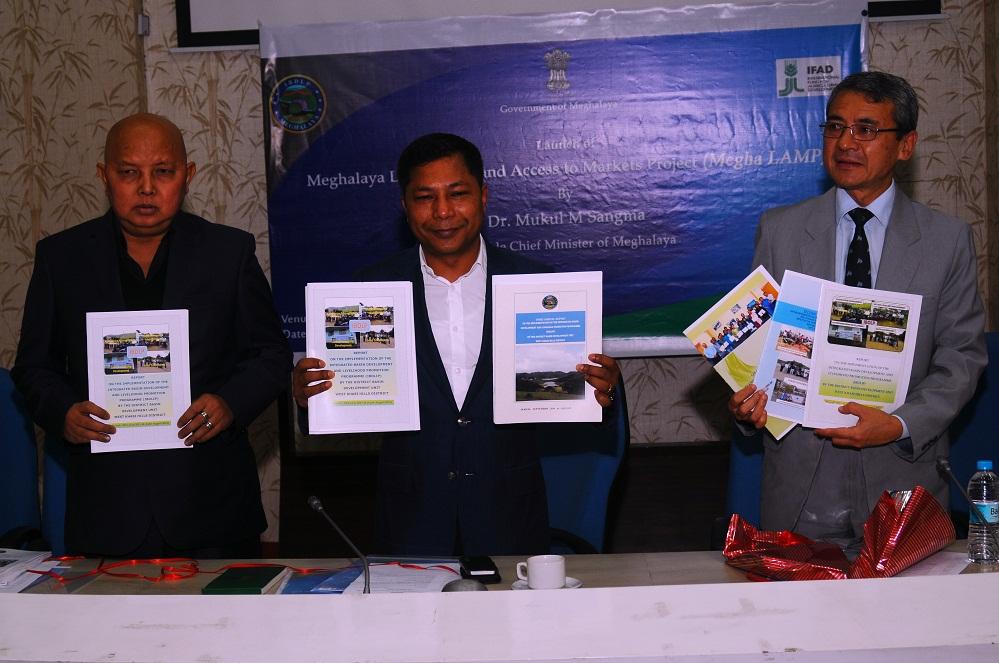 Megha LAMP is a key statewide initiative launched by the Government of Meghalaya with an objective to improve family incomes and quality of life in rural Meghalaya through specific focus on developing markets and value chains for sustainable livelihoods and ensuring that these livelihoods are adapted to the state’s geographical context and to the effects of climate change.

Megha-LAMP is being implemented as a part of the Integrated Basin Development and Livelihoods Programme (IBDLP) and assisted by the International Fund for Agricultural Development (IFAD). Project budget is USD 174 million, USD 50 million as loan assistance with technical assistance from IFAD, USD 50 million from Government of Meghalaya and remainder from bank loans, convergence funds and some contribution from participating households.

Megha LAMP, Sangma in his address said will develop 47,000 enterprises set up by rural communities across all 39 blocks along with 54 value chain and livelihood clusters across at least 18 blocks touching a total of 140,000 households with a special effort to include poorer households, women and the socially excluded.

He also informed that Megha LAMP shall create infrastructure for 55 primary markets across Meghalaya, will enhance rural connectivity for village clusters and producers through creating 250 km of eco-friendly roads, 20 submersible bridges and 10 ropeways across the target areas.

“The government is trying to fulfill its constitutional obligations there is a need to empower people so that they can take care of their social needs and basic necessities of food, clothing and shelter,” he added.

IFAD Mission Leader, Edward Mallorie said that Megha LAMP can be an international best practice as it is based on an institutional set up, is largely demand driven and community driven.
Sangma also released the Annual Report of Basin Development, West Khasi Hills district during the launch.

29 May 2014 - 8:34am | AT News
Security forces claimed to have killed a hardcore NDFB-S militant at an encounter in Udaguri district on Thursday. The encunter took place in the wee hours at Khoirabari area where the Bodo militant...

16 Oct 2015 - 7:36am | AT News Imphal
The Churachandpur Joint Action Committee thanked P A Sangma, Neiphiu Rio, Lalthanhawla, T. R Zaliang for throwing their weights behind the tribal agitators in Manipur who will have to bear the brunt...

17 Jan 2012 - 4:16am | editor
Aahotguri in Morigaon district pulls huge crowd on Monday when it hosted the traditional buffalo fight. Around 35 pairs of buffalo were taken for fight which drew huge crowd from early in the morning...