The stage is set for the Tiwa Autonomous Council polls on Wednesday. The polling is set to begin 8 in the morning in Nagaon and Morigaon districts. Morigaon is gearing up for polling at 190 booths to cover 19 council constituencies. The polling will take place at 95 booths covering 12 constituencies in Nagaon.

As many as 2, 22, 676 voters will exercise their franchise to decide on the fate of 119 candidates in the fray. The constituencies, mostly, will witness a triangular contest of BJP, Congress and Tiwa United Forum. 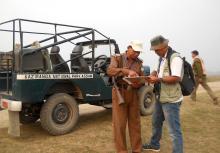 24 May 2015 - 12:00am | AT News
Amid blamegame over the SAF games, chief minister Tarun Gogoi dared union sports minister Sarbananda Sonowal to help him hold the international event in Assam. Addressing the annivesary rally in...