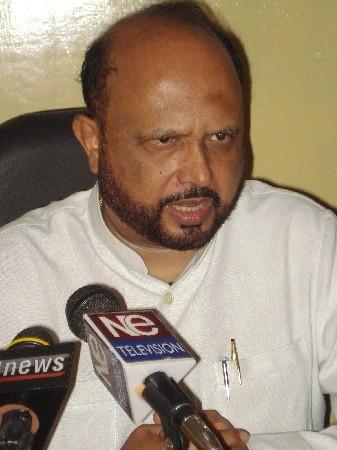 Former Assam Chief Minister Prafulla Kumar Mahanta says the alleged nexus of the Assam Government with terrorist outfit needs to be probed by a central agency.

Addressing a press conference in the city on Saturday, the AGP(P) president says lawlessness is what prevails in Assam and that the existence of a government is questionable. According to him, the nexus is not an new case saying his party will take up the case with the Centre. :We have apprised the Centre of the nexus and will take it up again.”

"Much to Gogoi’s embarrassment former Prime Minister Late Narasimha Rao asked him to put his papers while he was a Central minister but nobody still knows why,” he says adding that till date it is a mystery why he was made to resign within hours from the cabinet and that too over phone.

He criticized the party saying it’s an irony for Congress which boasts of its glorious past, has brought allegations of maintaining link with terrorist. "The party is more crazy for power than the unity and integrity of the country and that’s why they scrapped the laws which were brought to deal with militancy in the country, he added.

7 Jun 2015 - 2:42pm | AT News
AJYCP president Manoj Baruah has tendered his resignation paving the way for Ranjit Changmai to take the rein of the organization on Sunday.Baruah formally resigned at the special session organized...

23 Mar 2014 - 9:06am | AT News
At least 15 girls from a Dibrugarh university hostel have been undergoing treatment of food poisoning after they had their lunch on Saturday evening.According to information, initially one of them...

29 Nov 2015 - 4:08pm | Hantigiri Narzary
A women empowerment workshop was organized at Nagrijuli of Baksa district today to create awareness about uplift of women among society. Hudreds of educated women from various parts of the area...