9 Jun 2016 - 8:53pm | AT Kokrajhar Bureau
It is a sensational and rare incident took place that a resident of Ward No. 2 in Kokrajhar town, Bikash Kar, 22-years-old was found jumped to death in nearby Gaurang River pond due to family quarrel... 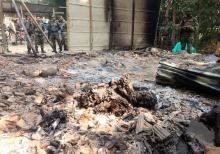