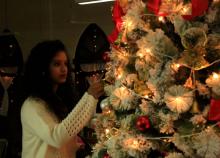 24 Dec 2016 - 8:49pm | AT New Delhi
The north eastern people residing in Delhi and NCR celebrated the Christmas evening with no less pomp and gaiety. The Nagaland and Mizoram Bhawans in the capital have dressed afresh with colorful...

14 Dec 2015 - 9:28am | Hantigiri Narzary
A documentary film “The Lost Horizon”, based on impact of violence on the lives of women and children in BTC was screened at  Recreation Hall, Central Institute of Technology (CIT), Kokrajhar...